Public transportation is the backbone of most large cities including New York City. Ideally subways enable people to move quickly and safely to their respective places for work, school, or other destinations important to them. How are New York City subways measuring up to this ideal in terms of public safety over time?

While researching this question, we noticed an article [subscription required]“Transportation Security for New York City Straphangers” by Samuel Estreicher and Zachray Garrett on Law.com (July 7, 2022) which for us is a well researched article that makes a significant contribution toward framing this issue.  Therefore, although we cannot reproduce or reprint the article, we will attempt to summarize and highlight its basic points.

Estreicher and Garrett propose two measures to help cope subway crime which they say “is up 54% since last year and 39% since last month [May]”. These measures are:

END_OF_DOCUMENT_TOKEN_TO_BE_REPLACED

Manhattan District Attorney Cyrus R. Vance, Jr., has announced the District Attorney’s Office’s (DANY) new policy on the prosecution of businesses and organizations. Below are links to the DANY Press Release announcing the new policy and the May 27, 2010 DANY memorandum which contains the actual policy
http://www.manhattanda.org/whatsnew/press/2010-06-01d.shtml Press Release June 1, 2010
http://www.manhattanda.org/whatsnew/press/ProsecutionofOrganizations.pdf Memorandum “Considerations in Charging Organizations” May 27, 2010

An abstract prepared for the Criminal Law Library Blog by Michael Chernicoff.

Are language barriers playing a role in law enforcement?  The Justice Department has begun a “routine audit” in New York to determine whether federal civil rights laws were being complied with in police dealing with non‐English speakers. Such reviews have been regular since 2002 when the Justice Department required recipients of grants to provide services to no‐English speakers
CLICK HERE TO SEE COMPLETE ABSTRACT

ISOC-NY on May 8 2010, hosted a seminar “dot nyc – How are we doing?” at NYU. NYC Council Member Gale Brewer delivered keynote remarks, then vendor Eric Brunner-Williams of CORE Internet Council of Registrars revealed details of their proposal to the City, and Antony Van Couvering of Minds + Machines and Public Advocate Beill DeBlasio’s earlier comments to the City Council were shown in video. There was a discussion “What’s it for?” about possible applications – civic, community, commercial, and “outside the box” – for a local top level domain. Speakers included Tom Lowenhaupt of Connecting .nyc and Richard Knipel of Wikimedia NYC. Audio/video is available .

The following is being posted as an urgent message at the request of a law librarian colleague :

As I am sure you know this year is on track to produce a budget disaster for libraries in New York City. The cuts currently proposed will result in massive layoffs and cuts in public service. A small group of library workers and concerned citizens has started a postcard campaign to highlight support for public libraries and ask the City Council to restore as much funding to library budgets as possible.

The idea is that we are going back to an old fashioned postcard writing campaign. Individuals are encouraged to write postcards in support of libraries and mail them to the offices of City Council Member Jimmy Van Bramer. His office will collect the postcards and present them to the City Council, en masse as a sort of Miracle on 34th Street statement. Any postcards will do. We suggest being creative, but inexpensive postcards, ten for a dollar in Time Square, work great too.

END_OF_DOCUMENT_TOKEN_TO_BE_REPLACED

A giant of New York politics and law enforcement recently retired from public office– Robert Morgenthau. Scion to a powerful family, Robert Morgenthau’s grandfather served as United States Ambassador to the Ottoman Empire, and his father was Secretary of the Treasury under Franklin Delano Roosevelt. While his famous name and lineage may have helped to open doors, Robert Morgenthau was determined to find a profession where he could navigate his own path in life.

After honorable combat service in the navy during World War 2, where his ship was torpedoed, Robert Morgenthau proceeded to law school and rose to partner in a major law firm. However, Robert Morgenthau largely dedicated his professional career, and indeed his life, to public service. He served as United States Attorney for the Southern District of New York for an eight year period from 1961 -1969. But he will surely best be remembered for his longstanding and legendary tenure as New York County District Attorney that spanned a thirty-five year period from 1974 – 2009. In this latter capacity, he resuscitated the office which was ravaged by budget problems and made it, what many law enforcement officials consider, the finest district attorney’s office in the nation and possibly the best overall law enforcement office in the nation.

END_OF_DOCUMENT_TOKEN_TO_BE_REPLACED

The following is from a letter sent by New York City Mayor Michael Bloomberg to OMB Director Peter Orszag requesting full federal funding to reimburse the City for security costs associated with Terrorism Trials to be held in Manhattan.

END_OF_DOCUMENT_TOKEN_TO_BE_REPLACED

One hundred years ago last Tuesday (November 3, 1909) the criminal court building in Manhattan (bounded by Centre, Lafayette, Franklin, and White Streets) was declared unsafe for human occupancy and everyone in the building at the time was ordered to leave immediately.

According to a New York Times article Written the following day, “when the last man was out a squad of thirty policemen under Inspector Daley and Captain Galvin took charge of the building, roping it off on all sides and remaining on guard outside the building to forbid anyone to enter or even pass through any of the flanking streets”.

END_OF_DOCUMENT_TOKEN_TO_BE_REPLACED

Histories of libraries are important because they help to both validate the existence of libraries and authenticate their records of service over time. This is why we are so grateful to our colleague Julie Gick for writing and granting us permission to post her meticulously researched article, HISTORY OF THE NEW YORK COUNTY SUPREME COURT LIBRARIES, on this blog. It includes information about both the Civil Term and the Criminal Term libraries of the New York County Supreme Court and certainly meets the criteria mentioned above regarding the importance of library histories. We encourage you to read this very informative and entertaining article
David Badertscher.

Note: This article has been updated to include additional information provided by the author on October 27, 2008

Beginnings
The New York County Supreme Court Law Library’s enabling statute was Chapter 722, Laws of 1865, effective May 12, 1865, although Griswold gives a starting date of 1852. (1)
The library was first known as the New York Law Library, and justices of the Supreme Court of the First Judicial District were its trustees.

The statute required trustees of the State Library to place in the new library any duplicate books in their possession which they deemed proper and the Clerk of the Court of Appeals was required to send one copy of the printed cases and points in all Court of Appeal cases. Any person who willfully injured any of the books, furniture or property of the new library was guilty of a misdemeanor. The sum of $5000 was appropriated for the use of the library. In 1879 the librarian’s salary was $1,500. The New York Times expressed concern about the court’s expenditures. (2) 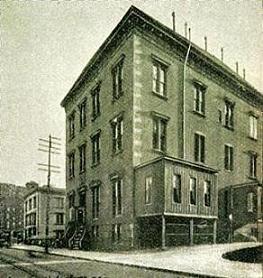 The law library was first located at 32 Chambers Street. This building is variously known as the Court of General Sessions, Marine Court and City Court. (3) The architect may have been John McComb,Jr. who designed the new City Hall and other buildings in the area. 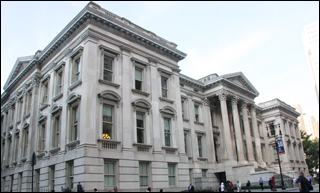 Architects John Kellum and Leipold Eidlitz designed the Tweed Courthouse, 52 Chambers Street at an estimated cost of $11-12 million. Also known as the Old New York County Courthouse, the library relocated to this new facility when it was completed in 1881. Over the years the library served as a lounge room, reference room, and sometimes as a courtroom. Although a handsome edifice the courthouse suffered from inadequate space and unsanitary conditions. The deaths of several justices and many clerks and court officers had been attributed to a malodorous and pestilential atmosphere pervading certain courtrooms. (4) 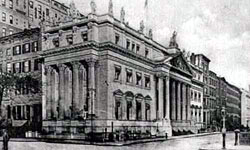 After the appellate branch was created effective January 1, 1896, the books and the Supreme Court librarian were assigned to the new court’s temporary quarters on the third floor at 111 Fifth Avenue corner of 18th Street. The Supreme Court Library was replaced by books from other courts, and an assistant librarian was hired to maintain its collection. In 1900 the Appellate Division 1st Department moved to its present quarters at 27 Madison Avenue. James B. Lord was the architect. He completed the building under budget for approximately $630,000. He died of a lingering illness said to be directly caused by a court proceeding. (5) 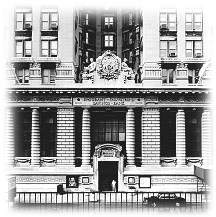 In 1907 the Emigrant Industrial Savings Bank, located at 49 Chambers Street, purchased the adjoining property at 43 – 47 Chambers Street. An architect named Raymond F. Almirall was hired to design a new building for the entire expanded lot. This was completed in 1912. At seventeen stories it was one of the tallest of the early skyscrapers in the downtown area. On March 15, 1912 the justices of the Supreme Court decided to move their offices and the library to this building. The library was located on the 12th floor. It was 25 x 100 feet and contained 5110 feet of shelving. (6) 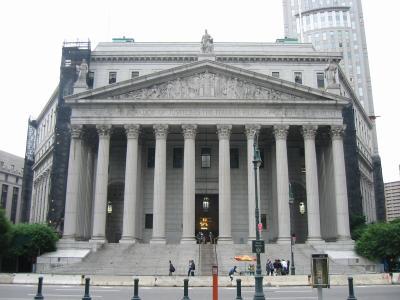 The present day New York County Courthouse, 60 Centre Street, was completed in 1927 at an estimated cost of $30,000,000. It was modified into a hexagonal structure from the original plan. The architect was Guy Lowell who in 1913 won a competition for his striking circular design. A week before the scheduled opening, Mr. Lowell died suddenly in Madeira, Spain. This is the home of the Supreme Court Civil Term Law Library. (7) 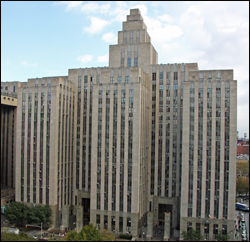 The New York County Supreme Court Criminal Term Law Library is located in the Criminal Courts Building. This edifice was completed in 1938 at a cost of $14 million, and was designed by architects Wiley Corbett and Charles B. Meyers. Until the merger in 1962 the Law Library served as the library for the Court of General Sessions which had its own impressive history. The first Presiding Judge (then called a Recorder) was James Graham who served from 1683 to 1688. At the time it was discontinued and made part of the Supreme Court in 1962, the Court of General Sessions was known as the oldest continuously functioning criminal court in the United States. (8) 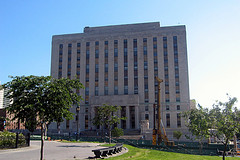 Prior to the creation of the 12th Judicial District Bronx Supreme Court Library was a part of the New York Supreme Court 1st JD. The courthouse was built in 1933 at a cost of $8 million and designed by Max Hausel and Joseph H. Freedlander. It is also known as the Mario Merola Building. (9) 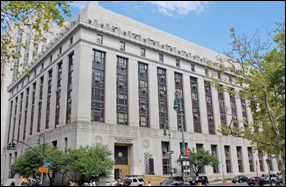 The New York County Courts Public Access Law Library opened February 14, 1995 and provides legal materials and information to the public. It is located at 80 Centre Street. The building, completed 1928-1930 at a cost $6 million was designed by William E. Haugaard, the state architect, under a height restriction so that it would not overshadow the nearby courthouses. (10)
END_OF_DOCUMENT_TOKEN_TO_BE_REPLACED

People often ask about procedures for obtaining approval to staging secial events in the City, especially those involving some form of street activity. New York City requires that a “Special Event Permit Application be submitted to the City of New York Street Activity Permit Office prior to any special event involving street activity held in the City. Depending on the type of event planned, other City agencies may also require approval. The below information includes a list of Application Sponsor Rules and Responsibilities, Support Permit Requirements, and a link to the City of New York Special Permit Application form:

IT IS THE APPLICANT’S/SPONSOR’S RESPONSIBILITY TO: